0
Start Future projects Extending the SFR
The blue sections of this picture depict the new section of the Final Repository for Short-Lived Radioactive Waste, SFR, that SKB wants to extend into the bedrock under the sea.

Planned extension of the SFR

SKB wants to extend the Final Repository for Short-Lived Radioactive Waste, the SFR, at Forsmark. In this way room can be made for the low and medium active decommissioning waste from the Swedish nuclear power plants.

Eventually Sweden’s nuclear power plants are going to be decommissioned and dismantled. The Barsebäck nuclear power plant has already been closed down, as well as two reactors in Oskarshamn and one in Ringhals. The idea is that most of the decommissioning waste that contains radioactivity will be deposited in the SFR. The waste comprise reactor components, scrap metal, concrete and other building materials that have been contaminated by radioactive substances during operation.

The plan is to extend the repository with six new rock vaults with a length of 240–275 metres so that it will be about three times larger than it is today. Just like the existing SFR, the extended section will be sited in the bedrock below the sea off Forsmark. But it is planned to locate the extension at a depth of 120–140 metres, the same level as the lowest sections of the existing SFR.

To enable this extension, SKB submitted the applications required by the Nuclear Activities Act and the Environmental Code to the Radiation Safety Authority and to the Land and Environment Court at the end of 2014. These comprise about 6000 pages and include, for instance, an environmental impact assessment and an analysis of the safety of the facility both during operations and after it has been sealed.

In January 2019 the Swedish Radiation Safety Authority gave the go-ahead for the extension. In autumn 2019 (Sep/Oct), the application was examined by the Land and Environmental Court in a main hearing. In November 2019 the Court delivered its approval. At the council meeting on 27 April 2021, the municipality of Östhammar, which has a veto in the matter, also said yes to the expansion. The next step is for the Government to decide on the matter based on the statements of the Court and the expert authority.

As soon as all permits have been granted construction work, which is reckoned to take six years, can start. 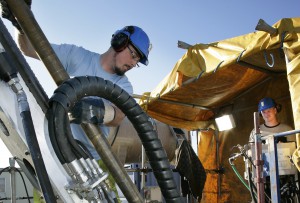 Drilling off the jetty in Forsmark harbour to prepare for the extension of the SFR.