Before the spent nuclear fuel is transported to the Spent Fuel Repository at Forsmark for final disposal it will be encapsulated in copper and nodular cast iron. This is planned to take place in an encapsulation plant to be built next to the interim storage facility at Oskarshamn.

The plan is to build the encapsulation plant next to Clab – the interim storage facility at Oskarshamn (the whole facility will then be called Clink). In the future the fuel will still have to be kept in interim storage for some time. This will allow it to cool down and become less radioactive. Afterwards it will be placed in an insert of nodular cast iron (a special kind of cast iron) and encapsulated in copper canisters in the encapsulation plant.

The canisters will be sealed using a special friction stir welding technique and carefully inspected using non-destructive testing methods. When the process is in full swing the plant will be able to deliver about 200 full canisters per year to be transported to Forsmark and the Spent Fuel Repository on board the special transport vessel M/S Sigrid.

Encapsulation is the first stage in SKB’s method for the safe final disposal of spent nuclear fuel. The technique is unique and has been developed by SKB in collaboration with universities, HEIs and institutes of technology.
There are a number of advantages to combining the plant with the interim storage facility. The staff working at Clab have long experience of handling spent nuclear fuel. Several of the systems that already exist in the interim storage facility will also be used during encapsulation.

Building permits from the municipality

SKB hopes that construction will start some time in the 2020s. The plant can then be commissioned at the same time as the Spent Fuel Repository, roughly ten years later.

For more information about the review of the permits for the encapsulation plant, see the pages on how our applications for permits for the Spent Fuel Repository are reviewed.

Did you know?
In addition to the encapsulation plant SKB is also planning to build a canister factory where the copper canisters will be machined, assembled and inspected. It is also intended to site this at Oskarshamn. As there will be no spent nuclear fuel in the canister factory it is not a nuclear installation. Instead it can be viewed as a normal engineering workshop.
Print 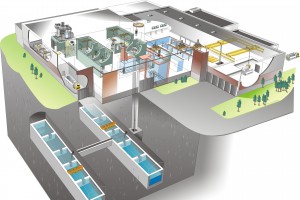