Aside from the extension of the Final Repository for Short-lived Radioactive waste and the construction of a future Spent Fuel Repository, SKB is also planning a final repository for long-lived waste, SFL. This project has not progressed as far as the others.

There is one final category of radioactive waste requiring final disposal, i.e. low-level and intermediate-level waste that is classified as long-lived. This waste consists of metallic material such as reactor core components and control rods from boiling water reactors, which are irradiated inside the reactor pressure vessel. Waste in the form of reactor pressure vessels from pressurised water reactors is also classified as long-lived. Other long-lived waste consists of legacy waste from early nuclear research or long-lived radioactive waste from other research, medicine and industry. 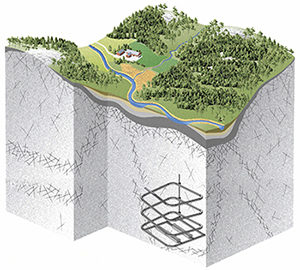 The repository concept that has been evaluated entails that SFL will be constructed at a depth of about 500 metres and will consist of two waste vaults.

SFL will be the last piece in the system for management and disposal of radioactive waste built up by SKB during the last half century. It will also be the smallest of the three final repositories and will have a storage capacity of about 16,000 cubic metres of waste.

The evaluated repository concept involves the construction of SFL at a depth of about 500 metres. The repository will consist of two waste vaults.

SKB’s experts have performed a safety evaluation to investigate whether the repository concept has the potential to meet the regulatory requirements on safety after closure. Since the waste that will be disposed of in SFL is long-lived, the safety evaluation covered a period of a million years – the same time period as in the post-closure safety assessment for the Spent Fuel Repository.

The safety evaluation of SFL shows that the regulatory requirements can be met if the right conditions are achieved. This means that the barriers in the repository parts must have the required properties, and the same thing applies to the bedrock where the repository is constructed.

It has not yet been decided where to construct SFL. A siting process will therefore take place. It will be a stepwise process based on openness and transparency. The basic requirements are that the repository must meet the requirements in the Nuclear Activities Act and the Environmental Code, and the local political and public support must be broad and stable. Municipal participation in the process will be voluntary.

The RD&D Programme 2019 presented background data and conditions for the siting. There are most likely many places with bedrock that is suitable for SFL. But data from site investigations is required to assess the suitability of a site. SKB will first investigate areas where nuclear activities already exist, and then areas where there are other industries. Special emphasis will be placed on the fact that Forsmark in Östhammar Municipality and Laxemar/Simpevarp in Oskarshamn Municipality are designated as areas of national interest for final disposal of radioactive waste.

The siting process begins with a feasibility study phase where a number of selected areas are evaluated based on different aspects such as post-closure safety, technology for implementation, environmental and health aspects, and societal conditions. The feasibility study phase is concluded with an assessment of which sites will be considered for site investigations. The next phase includes site investigation of one or several sites, studies and consultations. This will eventually result in the selection of a site.

To be able to carry out a post-closure safety assessment, three main factors must be defined: a site, an engineered barrier solution based on completed technology development and a radionuclide inventory, i.e. a description of the radionuclides that are present in the waste. When these three factors are in place, focused work with the post-closure safety assessment can begin. At the same time, other documentation will be prepared in order to be able to submit applications for the construction of SFL under the Environmental Code and the Nuclear Activities Act. The documentation includes an environmental impact statement and technical descriptions of the repository. When the licensing process is finished, the construction phase will begin. SFL is planned to be commissioned sometime in the middle of this century.