Aerial photo of the planned site of the Spent Fuel Repository (centre) at Forsmark. The picture is a photomontage. Illustration: Phosworks.

A repository for nuclear fuel that is placed in 1.9 billion years old rock

The planned Spent Fuel Repository at Forsmark will be located at Söderviken close to the Forsmark nuclear power plant. Here at a depth of 500 metres in rock that is 1.9 billion years old it is intended to deposit approximately 12,000 tonnes of spent nuclear fuel in a final repository.

Söderviken is located in Forsmark’s industrial zone and will be the site of the Spent Fuel Repository’s facilities above ground. These will consist of a number of buildings and a rock stockpile that will occupy relatively little space, an estimated 24 hectare approximately.

From here a ramp will be constructed that will be five kilometres long and descend to a depth of about 500 metres where a system of tunnels will then be constructed in the bedrock. When fully developed – some time in the 2080s – the repository will comprise something like 60 kilometres of tunnels with room for more than 6,000 copper canisters of spent nuclear fuel. The total volume of the space required underground in the rock will be about four square kilometres.

SKB hopes to be able to start work on the construction in the early 2020s and reckons that the Spent Fuel Repository can then be ready to start operations about ten years later. Building this repository will be an extraordinary feat in terms of nuclear safety. The mining technology involved will require the extraction of a total of about 2.3 million cubic metres of rock over several decades. 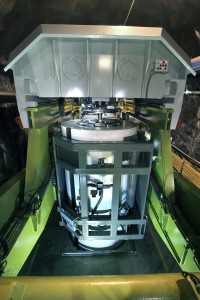 The emplacement of the copper canisters of spent nuclear fuel in the repository will be managed by specially built machines that can be remotely controlled with great precision. But if anything unexpected were to happen, it will be possible for the operators to repair the machines.

While canisters are being positioned in the finished tunnels new ones will be blasted. This will go on for about 40 years until all the nuclear fuel is in place. Then the repository will be sealed. During the whole of its operational life geologists will be at work surveying the rock and planning new tunnels.

During the first year of construction a hundred or so will be employed in the work. Gradually this number will expand and the final and most intensive phase of construction will employ 300–400. When the Spent Fuel Repository is in full operation it will need a staff of about 250, half above and half below ground. The operational organisation will include many categories of employees, from researchers to security and cleaning staff.

The repository in figures

There is room for over 6,000 canisters in the Spent Fuel Repository. 2,300,000 cubic metres of rock will be removed during its construction. The total length of the tunnels will be 66 kilometres. The repository will occupy three to four square kilometres underground. It is sited at a depth of 500 metres. 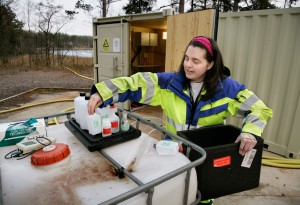