During the site investigation from 2002 to 2007 test drilling was carried out to assess the quality of the rock. Here Johan Berglund from SwedPower AB is inspecting a drill core rock sample from Forsmark. Photo: Alf Sevastik

How Forsmark was selected

The search for a site for a spent fuel repository has been a long and instructive process for SKB. The reason why it finally chose Forsmark is because of the dry rock with few deep fractures to be found there.

On 3 June 2009 SKB selected a site for the Spent Fuel Repository. This was Söderviken south-east of the Forsmark nuclear power plant. But the search began long before that. We have been assembling knowledge about Sweden’s bedrock since the middle of the 1970s.

Typological surveys of different areas were carried out between 1977 and 1985. It turned out to be impossible to identify specific geological environments that were generally better than any others. On the other hand local conditions in the bedrock can determine the safety of a final repository for spent nuclear fuel.

During the process SKB also learnt valuable lessons about the importance of a positive response to its plans from the local population. Protests took place in a number of places and at Almunge outside Uppsala demonstrations took place against SKB’s drills.

Based on voluntary responses

When the site identification process began in 1992 SKB chose therefore to base it on voluntary responses. Enquiries about participation were sent to every municipality in Sweden. Storuman and Malå were the first to respond positively and pilot studies were carried out in the two municipalities. In the local referendums, however, their inhabitants voted against continuing the surveys. SKB left both locations immediately.

Pilot studies were also made in Nyköping, Älvkarleby, Hultsfred, Tierp, Oskarshamn and Östhammar. At the same time SGU, the Geological Survey of Sweden, was conducting survey studies of the whole of Sweden that showed that there were potentially suitable sites in most of the country’s municipalities. 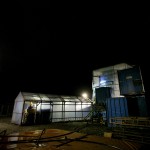 Finally SKB chose to undertake thorough site investigations with trial drilling in Östhammar and Oskarshamn. The site investigations lasted for five years, from 2002 until 2007. They involved studies of the geology, hydrology, ecology and social impact. In both municipalities there is strong local support for a future spent fuel repository.

The findings of the site investigations were compiled in the form of site models that show what the sites look like and how they change over time. When all the results had been analysed and evaluated the choice finally fell on Forsmark in the municipality of Östhammar. SKB’s experts were able to determine that there was sound rock with few fractures through which water could flow at the depth at which the Spent Fuel Repository would be located.

Since then the Spent Fuel Repository project at Forsmark has been working on preparations for the construction of a future repository for spent nuclear fuel. The idea is to start construction as soon as the Government has issued a permit. At the moment SKB believes this could be some time early in the 2020s.

Our task is to deal with all the radioactive waste from nuclear power plants in Sweden. In doing so we must meet the most stringent requirements regarding the safety of human beings and the environment. This task is so extensive that we view it as Sweden's largest environmental protection project.
Evenemangsgatan 13
Box 3091, SE-169 03 Solna
Phone: +46-8-459 84 00
Email: info@skb.se
© Svensk Kärnbränslehantering AB