The authorities review – the Government decides

SKB’s applications for licences to construct a spent fuel repository in Forsmark and an encapsulation plant in Oskarshamn have been reviewed by the Swedish Radiation Safety Authority and the Land and Environment Court and are now with the Government for decision.

The licensing process has taken several years and the final decision is made by the Government after the municipalities has answered yes or no. The Swedish Radiation Safety Authority (SSM) and the Land and Environment Court (MMD) have reviewed SKB’s applications. SSM’s licensing is carried out under the Nuclear Activities Act and MMD’s under the Environmental Code. 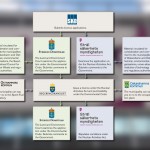 SKB’s applications were submitted to the regulatory authorities in March 2011. Shortly thereafter, the review was initiated. The documentation was reviewed by the regulatory authorities’ own experts and a large number of reviewing bodies. The concerned municipalities and county administrative boards, universities and higher education institutions, environmental organisations and others have had the opportunity to give their opinions.

Furthermore, the State requested that an independent international review would be made of the long-term safety after closure of the Spent Fuel Repository. The review was carried out by a group of experts appointed by the OECD’s Nuclear Energy Agency NEA. The group submitted its final report in June 2012 and it gave a favourable opinion on this part of the application.

The main hearing on SKB’s application was held in MMD in the autumn of 2017 and, in January 2018, the court submitted its opinion to the Government. The court was positive in several important respects, for example, it says yes to the issues relating to the site Forsmark, the rock, the buffer, the environmental impact statement and the facilities in Oskarshamn, but it calls for more documentation on the copper canisters. SSM also provided its answer in January and the authority’s statement was a clear yes to SKB’s system for final disposal of spent nuclear fuel

Approved by the Government

After the Government has made its decision, the matter is now handed back to SSM and MMD that will stipulate conditions for the facilities. The municipalities will also decide whether to grant building permits under the Planning and Building Act. SKB hopes that construction of the Spent Fuel Repository and the encapsulation plant can begin in the early 2020s and take around ten years to complete.

Once permits have been granted, this does not mean that the process is finished. There are a large number of controls that have to be passed before nuclear technology plants can be built. For instance additional permits are required from the Swedish Radiation Safety Authority before building can start, trial operations can begin, for routine operation and finally for phasing facilities out and sealing them. At each of these stages the preliminary safety analysis contained in SKB’s applications have to be expanded and become increasingly detailed.

Print
Our task is to deal with all the radioactive waste from nuclear power plants in Sweden. In doing so we must meet the most stringent requirements regarding the safety of human beings and the environment. This task is so extensive that we view it as Sweden's largest environmental protection project.
Evenemangsgatan 13
Box 3091, SE-169 03 Solna
Phone: +46-8-459 84 00
Email: info@skb.se
© Svensk Kärnbränslehantering AB