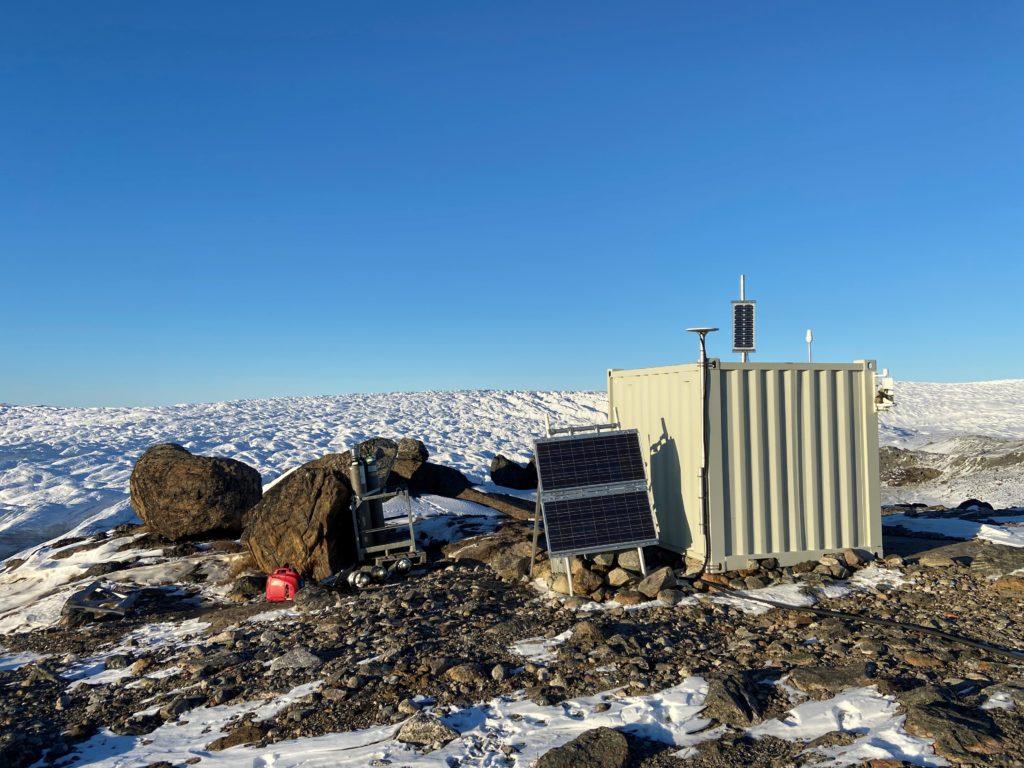 Container with equipment for measuring at the drill site of the approximately 700 metres deep hole. Photo: Lillemor Claesson Liljedahl.

SKB has been conducting climate research in Greenland for several years. In an article that is now being published in Nature Geoscience, researchers show that a warmer climate affects the groundwater system in the rock beneath and in front of the ice sheet. The discovery is not only important to broader climate research but also to SKB’s ability to assess the long-term safety of a spent nuclear fuel repository in future ice ages.

In a unique project initiated by SKB, a group of international researchers drilled about 700 metres into the bedrock in front of and under the Greenland ice sheet to study how the presence of the ice sheet affects groundwater conditions.

– Nowhere else have these conditions been studied in such a way, by taking measurements directly from the rock beneath an ice sheet. It is a novel study that contributes relevant data to climate research and increases our understanding of how climate change affects the groundwater system, says Jens-Ove Näslund, responsible for the climate discipline at SKB and associate professor of natural geography at Stockholm University.

Researchers from SKB have worked together with researchers from e.g. the University of Montana, the University of Wyoming, the nuclear waste organisation Posiva from Finland, and the geological investigation authorities in Denmark and Finland. The results now presented in Nature Geoscience show that the groundwater system reacts immediately and is sensitive to changes in the ice sheet.

– It’s the first time this type of process has been described. As the climate gets warmer, the ice sheet becomes smaller and thin, reducing the groundwater pressure in the rock, which is very noticeable. These results indicate that current and continued climate change will result in reduced groundwater flow, which in turn could have great effects on transporting nutrients and fresh water to the seas around Greenland, says Jens-Ove Näslund.

There is great international interest in the project and the study is expected to be widely distributed. For SKB, the experiment in Greenland provides concrete insights into processes that are important for assessing the long-term safety of the nuclear fuel final repository during future cold periods in Sweden and Forsmark.

– In our assessments of the long-term safety of the planned nuclear fuel repository, we have anticipated future ice ages, among other things. In this context, the new study is important as it increases our understanding of how the groundwater pressure at repository depth changes as the climate does, says Jens-Ove Näslund.

Lillemor Claesson Liljedahl is the main author of the article. She is a doctor of geology, was previously employed at SKB, and now works at DHI Sweden. Jan-Olof Selroos, head of hydrogeology at SKB and adjunct professor at KTH, has also participated in the study.

SKB has been conducting scientific research and technology development for more than 40 years. The research programme spans areas such as geology, hydrology, chemistry, ecology and climate.

Link to the article