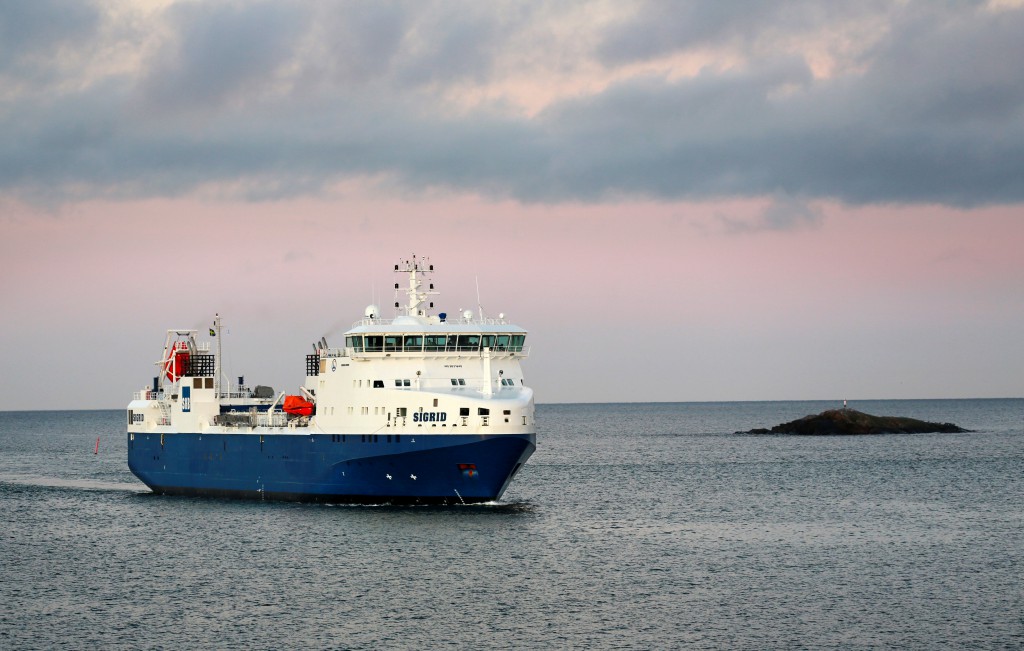 The light of dawn welcomed M/S Sigrid as she called at a Swedish port for the first time. SKB’s new transport vessel arrived to Ringhals on Monday 2 December.

Sigrid glided into the port at the Ringhals nuclear power plant right before nine o’clock. The morning sun had just begun to appear behind the Värö mill to cast its first rays over the blue hull.

Damen started construction on Sigrid over two years ago at the shipyard in Galati, Romania. The vessel was launched late last autumn. After that, all her installations had to be implemented before she was ready for delivery.

The next phase involved a long journey home to Sweden. It took about one month to travel along the Danube, out to the Black Sea, over the Mediterranean Sea and then up to Rotterdam. The weather was harsh the last few days before her arrival to Ringhals, and Captain Hans Larsson says there was a lot of rocking on board.

He has worked at SKB’s contractor Furetank Rederi AB for 13 years, but this is the first time he takes on a completely new vessel.

“It is a unique experience and you have to constantly find your way. Being part of something like this may very well be a once in a lifetime experience. It is more common to take over a vessel from someone else.”

Hans Larsson has been at the shipyard full time getting acquainted with Sigrid since mid-October. And even if there is a lot to take in, he already feels comfortable with the new vessel. Berthing was never a problem either. The vessel was slowly and carefully manoeuvred in toward the quay.

Amongst others, Christopher Eckerberg, SKB’s managing director, and Jenny Holmström, project manager during shipbuilding, were on hand to meet Sigrid. Jenny has been working hard with the project for a long time. Now she is very happy that Sigrid’s home port Oskarshamn will soon be within reach.

The vessel has not carried a radioactive load yet; rather, the runs are solely trials with the aim of testing the ports and vehicles together, and to test mooring, for example.

“However, the first real transports should be reality by the end of the year,” says Jenny Holmström.

An historical change has taken place in what Christopher Eckerberg calls the hub of SKB’s transport system. The plan is for the new Sigrid to take over the soon-to-be 30 year old Sigyn’s duties completely before too long – duties that include transporting radioactive waste and spent nuclear fuel between the nuclear power plants and SKB’s facilities.

Sigrid is 99.5 metres long (slightly longer than predecessor Sigyn), 18.6 metres wide, with a draught of around 4.5 metres and a cruising speed of 10 knots. Besides being able to take on a greater load than Sigyn, she is in line with the new safety requirements and offers environmental benefits.