Today, December 19, Swedish Nuclear Fuel and Waste Management Company (SKB) is submitting applications to extend the final repository for short-lived radioactive waste (SFR) at Forsmark. This represents a milestone, and a big step towards a final solution for decommissioning waste from the Swedish nuclear power plants.

“The extension of the SFR is an important milestone for SKB and for the Swedish nuclear waste programme. We are now taking a step closer towards the aim of being able to deal with radioactive waste both from operations and from decommissioning of the Swedish nuclear power plants,” says Christopher Eckerberg, SKB’s CEO.

During the day SKB will submit the applications, in the form of a number of boxes and USB sticks, to the Swedish Radiation Safety Authority and the Land and Environmental Court. The total extent of the applications is about 6,000 pages. 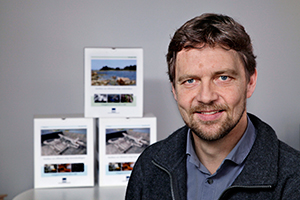 “What we show in the applications is that the extension can take place safely, without any negative impact on the existing plant. Safety will also be maintained during operation of the extended plant and after closure,” says Peter Larsson, Project Manager.

The SFR at Forsmark, in the municipality of Östhammar, began operating in 1988, and the plans for a future expansion were there right from the start. The plans were then updated when Barsebäck’s two reactors were shut down. During operation, certain radioactive substances became attached to building components, pipes, etc. During the course of decommissioning, these will be collected and transported to the SFR for permanent storage.

But the applications do not only concern Barsebäck; in the course of time, reactors which are still in operation today will also need to be decommissioned. In addition, there will be increased quantities of operational waste resulting from extended periods of operation of nuclear power plants.

After extension, the SFR will be almost three times its current size, with a total capacity of 171,000 cubic metres of waste. The extended part will consist of six new rock chambers. These will be located at the same depth as the lower part of the present SFR.

Sometime in the future, the nine reactor tanks from the Swedish nuclear power plants will also stand lined up in one of the rock chambers deep in the repository. The tanks are large, and investigations have shown that it is best to store them intact in the final repository. In order to get them down into the repository, SKB is also planning a new, larger, entry tunnel.

“When everything is finished, the whole SFR will have a modern, well-functioning facility with room for Swedish low and intermediate level radioactive waste both from operations and from decommissioning,” says Larsson.