Clab – the Central Interim Storage Facility for Spent Nuclear Fuel is located at Simpevarp about 25 kilometres north of Oskarshamn. This is where all the spent nuclear fuel from Swedish nuclear power plants is kept while waiting for the final repository to begin operating.

After five years use in a nuclear power station the nuclear fuel is spent. Initially the spent fuel is stored in the nuclear power plant, but after about a year it is moved to Clab. During interim storage it is kept in deep storage pools about 30 metres below ground in the rock. Covering the fuel with eight metres of water shields against radiation and cools down the hot fuel. In time the radioactivity wanes and the fuel is therefore easier to manage when disposed of finally in the Spent Fuel Repository SKB plans to construct at Forsmark. 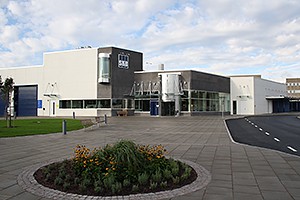 Today there are approximately 7 7 750 tonnes of spent nuclear fuel in interim storage in the facility. It is monitored and checked continuously. Shortly after year 2000 the facility was extended. Today it has a permit for the interim storage of a total of 8.000 tonnes. At the beginning of 2015 SKB applied for a permit from the authorities to store up to 11.000 tonnes. The reason for this is that otherwise there is a risk that Clab will be full before the Spent Fuel Repository at Forsmark is commissioned.

A final repository is needed

Clab is a safe facility for today’s needs but does not offer a long-term solution. As nuclear fuel has to be isolated for an extremely long period, a repository is needed that will be safe even without supervision. For this reason the spent fuel will eventually be sealed into copper canisters and transported to the future Spent Fuel Repository at Forsmark.

Would you like to learn more about the planned encapsulation plant and the Spent Fuel Repository? You can read more on the pages under the tab Future Projects.

A short film showing how nuclear fuel is dealt with at Clab – the Central Interim Storage Facility from when it arrives to when it is unloaded. Once the spent nuclear fuel has arrived at Clab it first has to be cooled down before it can be unloaded from the transport containers and placed in storage canisters. The canisters are then transported down to the underground storage pools for interim storage until the Spent Fuel Repository is commissioned.