In many areas SKB is at the forefront of global research into the final disposal of radioactive waste. Much of this research has been undertaken at our three laboratories in Oskarshamn.

It did not take long before SKB realised that it needed somewhere where the welding techniques to be used to seal the copper canisters before final disposal could be developed. In 1998 it therefore inaugurated the Canister Laboratory on a site at the harbour in Oskarshamn. This contains unique welding equipment for friction welding adapted to SKB’s needs.

Since 2007 there has been a special facality at Äspö for work on buffers, the Multipurpose test facility. There we develop and test the equipment needed to handle and install the buffers in the Spent Fuel Repository.

You can read more about our laboratories using the menu on the right.
If you are a researcher and would like to know more about the possibility of undertaking experiments at SKB’s laboratories, you can find more information under the heading For researchers. 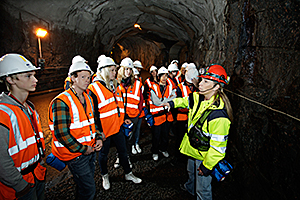 All of SKB’s facilities are open to visitors. Every year we welcome thousands of visitors to our guided tours and our exhibitions.
Book your visit here!